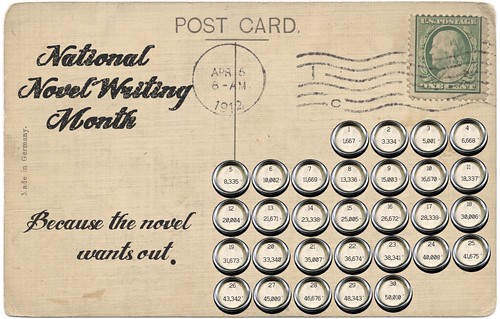 This is the sixth year that I’ve participated in NaNoWriMo, and (at least) the third year that I have used a spreadsheet to track my word count. Given that, as any WriMo knows, half (or more) of NaNoWriMo is spent avoiding actually writing one’s novel, I’ve spent far too long on this. The version from 2007 is lost, I’m afraid, but the sheet I created in 2008 has survived (and been tweaked incessantly so far this year). And that, dear reader/writer, is what I’m bringing to you. Behold!

Why am I “releasing” this? After all, there are over 300,000 hits when one googles “nanowrimo word count.” Not all of these are trackers, but you get the idea. There are web-based trackers and there are other Excel-based trackers.

Why, you ask? I figured that someone somewhere might find a use for it. Maybe I should have googled this before I built my own, though…but I still like it. Besides, it has given me a way to procrastinate during the past two Novembers.

Using it should be pretty intuitive, I think, but comment if you need help. It makes several assumptions (ie., dates are for November, total word count goal is 50,000, etc.), though these should be easy to change if you’re familiar with Excel. Perhaps there will be another version later that allows these to be variable. We shall see!

Check out these screenshots! See how far behind I am! Total Chart, showing wordcount relative to goal for the month